TEHRAN (defapress) – A member of Parliament’s national security commission said Iran has compiled a case containing evidence and documents regarding the perpetrators of an attack on an Iranian oil tanker and will soon take it to the United Nations.
News ID: 78994 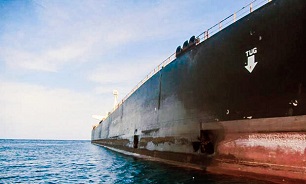 Speaking to Mehr on Wednesday, Abolfazl Hassanbeigi, a member of Parliament National Security and Foreign Policy Commission, said “a video captured by cameras installed on the tanker show the attack was carried out by the US, the Zionist regime and Saudi Arabia.”

He was referring to tanker Sabiti owned by the National Iranian Oil Company (NIOC), which was hit in Red Sea waters off Saudi Arabia by two missiles on Friday, leading to a leak which was quickly contained.

“Saudi Arabia and the US are trying to put the blame on the ISIL or the Taliban for the attack, but the documents dismiss such a notion as no ISIL or Taliban terrorists are present in the Red Sea,” he added.

At any case, he said, even ISIL and the Taliban were created and sponsored by Saudi Arabia and the Israeli regime.

“There are many documents and pieces of evidence pertaining to the involvement of some governments in the attack on the Iranian oil tanker. These documents will be taken to the UN and the Security Council so that those countries behind this terrorist attack would pay for their action,” he added.

On Tuesday, Foreign Minister Zarif said the attack on an Iranian oil tanker in the Red Sea was a “complicated action” in which “one or more governments” were involved.

“According to information received, the attack on the Iranian tanker has been carried out by one or more governments. Of course, investigations are underway, but as long as we have not reached definitive conclusions, we will not accuse any government,” Zarif said, adding “the attack on the Iranian tanker was a sophisticated, state-sponsored action.”