TEHRAN (defapress) – Iranian President Hassan Rouhani praised bilateral relations between the Islamic Republic and Algeria as very close and age-old and said the two governments should boost their economic cooperation more than ever.
News ID: 79102 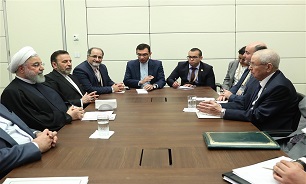 Iran and Algeria should develop new mechanisms to boost their bilateral relations, Rouhani said at a meeting with the interim president of Algeria, Abdelkader Bensalah, in Baku on Friday on the sidelines of the 18th Non-Aligned Movement (NAM) Summit.

“The formation of the joint economic commission of the two countries can help develop this cooperation,” he added.

Bensalah, for his part, hailed the deep relations between Iran and Algeria and said, the two countries should remove all the obstacles on the path of developing the relations.

The Algerian interim president further briefed Rouhani about the latest developments in his country.

Heading a high-ranking delegation, Rouhani paid a trip to Azerbaijan to address the 18th NAM Summit, which kicked off on Friday in the Azeri capital, and explain the Islamic Republic’s positions on important regional and international issues.

Host Azerbaijan took over the chairmanship of the NAM for the next three years at the Baku Summit.