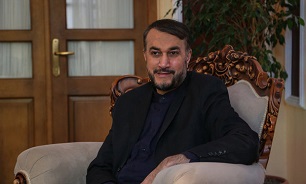 “Palestine's democratic solution is a referendum among genuine Christians, Muslims and Jews,” wrote Hossein Amir-Abdollahian in a tweet on Friday.

His tweet also contained praise of a theater performance of the ‘Seven Jewish Children’, which he had just watched.

“With a novel view, the performance depicts crimes in Palestine from perspective of Jewish generations. A young and inspiring group is performing,” Amir-Abdollahian said in praise of the performance, which is directed by Mostafa Esfandiari and currently on stage in Tehran.

The performance is based on 'Seven Jewish Children: A Play for Gaza', a six-page, 10-minute play by British playwright Caryl Churchill, written in response to the 2008-2009 Israel military strike on Gaza. The conflict resulted in between 1,166 and 1,417 Palestinian death, according to reports.