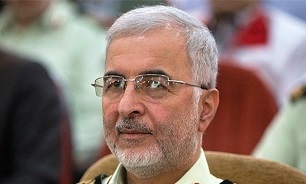 Over 800 tons of drugs were seized last year, major portion of which was while confronting transit of narcotics to western states, General Momeni said in a meeting with Chinese Ambassador to Iran Chang Hua late on Tuesday.

He added that presence of trans-regional forces under the excuse of fighting drugs and terrorism in Afghanistan is totally ineffective.

General Momeni also referred to Iran-China historic ties, and said that the relations were excellent in all fields in all historic eras, but despite current strong bilateral ties in all domains, there is further room for promoting mutual cooperation in fighting drugs.

Given its adjacency to Afghanistan and being a conduit for transit of drugs over the past 40 years, Iran has conducted an all-out fight against drugs, he said.

"Iran has used all its power in the fight against drugs and presence of trans-regional forces to fight drugs and terrorism in Afghanistan was totally ineffective," General Momeni said, adding that Drugs are the enemy of humanity and that's for the same reason Iran is campaigning against it and some 3,800 forces have so far lost their lives in this way.

Also, in April, Iranian Police Chief Brigadier General Hossein Ashtari had described Iran as a pioneering state in campaign against drug trafficking, and said, "We have declared our information and needs to the international organizations and I should say that we have not pinned hope on their aid."

"We do not have hope that the international organizations can seriously confront" the cultivation and production of narcotics in Afghanistan, General Ashtari said.

Afghan and western officials blame Washington and NATO for the change, saying that allies have "overlooked" the drug problem since invading the country 18 years ago.