Damavand destroyer to be equipped with advanced ‘Eagle Eye’ radar

TEHRAN (defapress) – The commander of the naval forces of the Iranian Army Rear Admiral Hossein Khanzadi says that Damavand destroyer will be equipped with advanced‘Eagle Eye’ radars, adding that Be'sat submarine will also be equipped with vertical launch missiles.
News ID: 79418 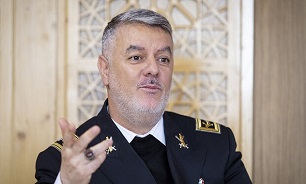 Speaking during the Special News Talk on IRIB Channel 2, the commander of the Iranian Army’s Navy, said that Damavand destroyer has been redesigned in accordance with the Caspian Sea conditions.

Khanzadi added that Damavand has 2 engine houses now in which there are four engines each in comparison with the former design that had only one engine house.

The Army Navy commander further said in the interview on IRIB 2 that Damavand has been redesigned and now is equipped with advanced ‘Eagle Eye’ radars.

Elsewhere, he referred to the Be'sat submarine, saying that the submarine weighs more than 3,000 tons.

He also said that the designing of Be'sat and its detailed modular designing has ended, adding that constructing the new domestaccly-made submarine will begin as early as the next Iranian calendar year (starting on March 21 2020).

The navy commander added that the Be'sat submarine will also be equipped with vertical launch missiles.