US will definitely be kicked out of world’s marine areas 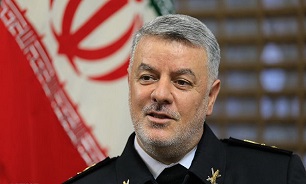 He made the remark in a TV interview on Saturday night, while discussing the details of Iran’s joint naval drill with Russia and China currently underway in the northern part of the Indian Ocean and the Sea of Oman.

He said as many as 2000 people are taking part in the drill, with 500 of them from Russian and Chinese naval forces.

“All three countries of Iran, China, and Russia, which are major naval powers, have common threats and enemies, and this [drill] is a serious rallying cry and a bold stroke against the threats that each of these countries could possibly face at sea,” the Iranian commander said.

He added that the United States is on top of the list of threats facing these three countries, saying “the US, with its meddling in every area and region, is definitely our priority. They will for sure be expelled from various marine areas in the world.”

Khanzadi then discussed Iran’s peace initiative dubbed Hormuz Peace Endeavour (HOPE), saying the initiative highlights that the Persian Gulf and the Strait of Hormuz regions must be free of the presence of any foreign forces.

“Today, the Islamic Republic of Iran, as a sovereign country in the region, will not succumb to any pressure and has no fear of declaring its policies independently,” he stressed.

“The readiness is always there for the Islamic Republic of Iran and its armed forces to send the Iranian navy to any part of the world at any given time,” Khanzadi concluded.

Iran, Russia, and China on Friday started a four-day joint naval drill, dubbed as the "Marine Security Belt," in an area of 17,000 square kilometers which consists of "various tactical exercises," such as target practicing and rescuing ships from assault and incidents such as fires.

The naval drills, the first of their kind, aim to secure international trade routes in strategic waterways and boost preparedness among participants against piracy and marine terrorism.

The three countries have sent some of their most advanced vessels to take part in the exercises.