TEHRAN (defapress) – A provincial commander of the Islamic Revolution Guards Corps said 35 vital American targets in the region are within the reach of Iranian forces, stressing that the US and Israel must be in a constant state of panic following the assassination of Major General Qassem Soleimani.
News ID: 79788 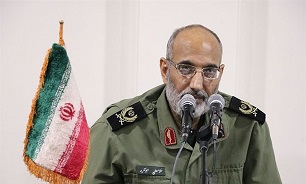 General Abuhamzeh emphasized that the American and Zionist officials should suffer from stress and wonder when and how Iran will exact revenge for the blood of General Soleimani, who was assassinated in a US drone strike in Iraq in the early hours of Friday.

He went on to say that vital American targets in the Middle East have been identified since a long time ago, adding, “Thirty-five vital American positions in the region are within the reach of the Islamic Republic, and Tel Aviv -the US’ heart and life- is also within our reach.”