Iran to stand by EU's independent positions from US

TEHRAN (defapress) – Iranian President Hassan Rouhani told Italian PM that Tehran would stand by the EU's independent and right positions in promoting peace and stability in the world.
News ID: 79859 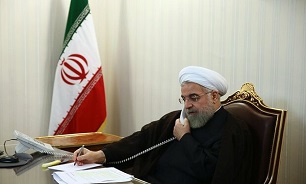 The President of the Islamic Republic of Iran and the Prime Minister of Italy held a telephone conversation Thursday evening and discussed the most important bilateral and regional and international issues.

President Hassan Rouhani and Italian Prime Minister Giuseppe Conte described the friendship between the two nations as deep and close, and shared the view that cooperation between the two countries should be deepened to contribute to peace and security in the region.

Referring to the Italian Prime Minister's sympathy and condolences over the recent incidents, Rouhani described the US terrorist acts as a serious threat to regional security, emphasizing that the assassination of Lt. Gen. Soleimani was rooted in US anger at the commander of the fight against terrorism and ISIL in the region.

He added, "Regional nations are very angry at the United States' actions, and we should all make efforts to contain the tensions and strategic mistakes of the autocratic US government, which arise out of their ignorance, and make them adhere to the law," he said.

The president also called on the EU to take independent positions on important issues in the region, saying, "Security in the region will not be possible unless everyone respects the law and try to prevent such crimes from happening around the world".

Referring to the cooperation between Iran and Europe, including Italy, on important regional issues, Rouhani stated, "The EU has a heavy responsibility toward world issues and should be independent of the US wrong policies by taking the right positions in promoting peace and stability in the region and the world, and Tehran will undoubtedly be alongside the Union under such circumstances".

The president emphasized that the problems of the region should be handled by the region itself, and the Iraqi Parliament's decisive vote on the need for US troops to withdraw was a clear and definite response to US interference and terrorist activity.

In the same phone call, the Italian Prime Minister said that the Italian government understands the extent of the Iranian nation's anger over the killing of Lieut. Gen. Soleimani, calling for an all-out effort to ease tensions in the region, saying, "Italy has made every effort to reduce tensions and promote peace and stability in the region".

He also stressed the importance of the JCPOA and means of maintaining this international agreement despite US obstructions.