TEHRAN (defapress) – Iranian President Hassan Rouhani says those responsible for the unforgivable mistake that brought down a Ukrainian plane near Tehran will be identified and prosecuted.
News ID: 79862 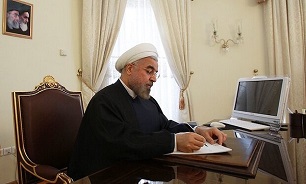 In a statement released on Saturday, Rouhani said, "The Islamic Republic of Iran deeply regrets this disastrous mistake... My thoughts and prayers go to all the mourning families. I offer my sincerest condolences."

The president stressed that “the terrible catastrophe should be thoroughly investigated, and those responsible for this unforgivable mistake will definitely be identified and prosecuted.”

The general staff of the armed forces said those responsible for shooting down the passenger jet would "immediately" be brought before military justice.

It assured that "by pursuing fundamental reforms in operational processes at the armed forces' level, we will make it impossible to repeat such errors."