Iraqi Resistance Group Vows to Take Revenge on US

TEHRAN (defapress)- Secretary General of al-Nujaba Movement Sheikh Akram al-Kaabi reassured the family of Lieutenant General Qassem Soleimani who was savagely assassinated by the terrorist army of the US at Baghdad International Airport that Resistance groups of the region will exact revenge on American perpetrators of the criminal act.
News ID: 79879 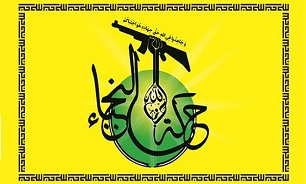 In his visit to the house of martyred General Soleimani in Tehran on Sunday, Sheikh Akram al-Kaabi said that the Resistance movement will take revenge on perpetrators of US terrorist act in assassinating IRGC Quds Force Commander General Soleimani very soon.

Iraq will not be a safe place for American mercenaries and terrorists anymore, he emphasized.

While expressing his condolences on the martyrdom of General Soleimani, Al-Nujaba secretary general said, “I pray the Almighty God the bestow forbearance to you for this irreparable loss.”

Lieutenant General Soleimani was martyred in a targeted assassination attack by the US drones at Baghdad International Airport early on last Friday.