TEHRAN(defapress)- Leader of the Iraqi National Wisdom Movement Ammar Hakim in a message said the victory of the Islamic Revolution of Iran has served as a turning point in the contemporary history.
News ID: 80186 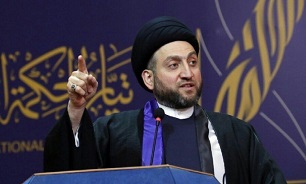 He added that its popularity, its peaceful and national as well as popular nature, its dependence on people and its independence from any foreign forces were among other characteristics of the Islamic Revolution.

Referring to Iran’s role in defending oppressed people of Palestine, Hakim said the Islamic Revolution has complete plan for governing the country and is pioneer in defending important Islamic issues.

He expressed congratulation on the 41st anniversary of the Islamic Revolution and wished progress and stability for Iran and the Islamic nation.

The Iranian nation toppled the US-backed Pahlavi regime 41 years ago, ending 2,500 years of monarchy in the country.