TEHRAN (defapress) – Foreign Ministry Spokesman Abbas Mousavi reacted to the latest crime of the Saudi-led coalition which claimed the lives of dozens of civilians in al-Maslub, Jawf Province.
News ID: 80231 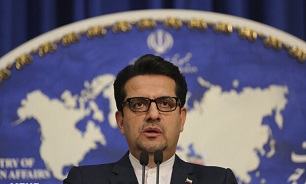 Strongly condemning the aggression which has taken the lives of women and children, Mousavi extended sympathies with the families of victims and the Yemeni people.

“During the past years we have repeatedly witnessed that whenever coalition forces, led by Saudi Arabia, or their allies concede humiliating defeats in the battlefield, they carry on inhumane killing of women, children and civilians using American weapons,” said the spokesperson, noting that what has happened in the Jawf province is just one instance of such war crimes.

“The international community’s silence towards this war crime has made its perpetrators more impertinent to kill more civilians and has led to the violation of all international and humanitarian rules.”

According to Yemeni media, at least 30 civilians have been killed and many others injured in air raids conducted by Saudi warplanes on Yemen's northern Jawf Province. The strikes targeted people who had gathered near the wreckage of a Saudi jet that had been shot down by Yemeni forces on Friday evening.

The al-Masirah TV cited difficulty in confirming the number of victims as body parts were scattered over the targeted area.

The spokesman for Yemeni Armed Forces said on Friday that they had downed a tornado warplane belonging to "enemy forces" in Jawf Province. Brigadier General Yahya Saree said the warplane was brought down by an advanced air-to-ground missile.

The spokesman for Yemen's Houthi Ansarullah movement on Saturday condemned the Saudi massacre in Jawf, saying, "As usual, when the most brutal US-Saudi aggression receives painful strikes in the military confrontation fields, it replies with great folly by targeting civilians."