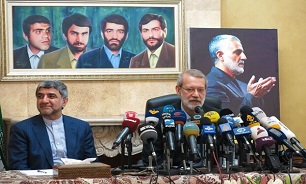 In a press conference in Beirut late on Monday, Larijani underlined the need for expanding the bilateral ties between the two countries, saying Tehran is ready to cooperate with Beirut in economic, industrial, pharmaceutical, scientific, cultural, agricultural and military sectors.

The parliament speaker called for implementing the agreements already signed between Iran and Lebanon in the cultural and scientific fields.

"We know no limitation for academic cooperation and Iran has various universities that Lebanese students can forge technical, scientific and artistic communications," he said.

Larijani noted that Iran is ready to aid the new Lebanese government, expressing hope that the new government would be able to solve problems faced by the country's people.

He stressed that the sole way to solve the problems is that people stand united alongside the government's resolve, noting that if they seek help from the US and Saudi Arabia, their crisis will remain unresolved.

If the Lebanese think that the US is the source of generosity and go after it, they are mistaken, as Iran realized in the nuclear issue that the Americans know nothing but to harm and they are seeking to help the Israeli regime dominate the region, Larijani said.

Elsewhere in his remarks, he added that Hezbollah is a great asset of Lebanon which has blocked the Israeli regime's aggression and tyranny.