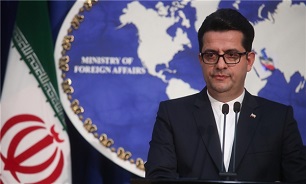 Mousavi slammed a recent statement issued by the so-called Arab Quartet Committee against Tehran, noting that those countries are themselves the main reason behind spread of insecurity, instability, and terrorism in the region.

The committee that comprises Saudi Arabia, the United Arab Emirates, Bahrain, and Egypt issued the statement in Cairo on Wednesday, accusing Iran of regional interference, including in Bahrain and Syria.

The spokesman for Iran's Foreign Ministry called the “self-styled” body’s statement “vain and tedious,” calling it an irresponsible and irremediable mistake on the part of those issuing it.

The official then called attention to the atrocities committed by the very members of the committee, including creation of and support for ISIL terrorists in Iraq and Syria.

He also reminded the four countries of their action to launch and support for the “folly-ridden” war on Yemen, which has killed tens of thousands of Yemenis, including women and children, laid waste to the impoverished country’s infrastructure, and afflicted it with famine.

Mousavi also pointed to Bahrain’s suppression of peaceful protests and execution of its youths during its crackdown on the popular uprising that the island has been facing since 2011.

Tehran has routinely spurned any claims of alleged intervention in the affairs of regional countries, including Bahrain, urging the kingdom to start hearing the voices of its people instead of violently suppressing the protests.

The quartet also claimed that the Iranian presence in Syria entails serious implications for the Arab country's sovereignty, security, and stability.”

At Damascus’ request, the Islamic Republic has been lending military advisory support to Syria against militants and terrorists propped up by regional and extra-regional countries, including members of the Arab quartet.

The statement, meanwhile, accused Iran of attempts to threaten energy security, freedom, and safety of marine installations in the Persian Gulf and other maritime routes while hailing Bahrain’s contribution to efforts aimed at confronting what it called "the risks posed by the Iranian practices to maritime and air navigation in the region."

The committee was apparently referring to maritime incidents last year involving several tankers in the body of water, which have never been traced back to Iran and were even followed by Iranian ships’ lending assistance to the crewmembers of the stricken vessels.

The Arab countries’ statement also accused the Lebanese resistance movement of Hezbollah of regional interference, calling the group “a main source of tension” that “needs to be deterred.”

Mousavi pointed to the Lebanese Hezbollah as “the biggest and most effective Arab and Muslim force against the Zionist regime's aggression and expansionism,” saying that the quartet’s remarks targeting the group were in alignment with the United States and Israel’s policy concerning it.

Finally, the spokesman advised the Arab states against turning into the US’ “arms depots,” because buying American weapons would not contribute to their national strength, saying “security cannot be imported and purchased."

Contrary to such states, Iran’s military power, including missile defense capability, was indigenous, he noted, saying that the defensive prowess never of the Islamic Republic constituted a threat to any Arab or Muslim country and was not open to any negotiation.

In October, Mousavi categorically dismissed Manama’s accusations about Tehran's involvement in the smuggling of explosives to the tiny Persian Gulf island, describing the claim as worthless and based on illusions.

During his weekly presser in Tehran, Mousavi strongly rejected the remarks made by Bahraini Foreign Minister Sheikh Khaled bin Ahmed Al Khalifa who had accused Iran of meddling in the tiny Persian Gulf island’s internal affairs.

In September, Mousavi strongly dismissed Saudi Arabia’s “repeated and baseless” accusations to implicate Tehran in attacks on the kingdom’s oil sites, and said that failures have pushed Riyadh to resort to blame-shifting.

A week later, Islamic Revolution Guards Corps (IRGC) Deputy Commander for Coordination Brigadier General Mohammad Reza Naqdi said that the US and Europeans' accusations about Iran's involvement in the Yemenis' drone attacks on the Saudi oil facility are meant to divert public attention from the power of the resistance forces in the region.