TEHRAN (defapress) – The United Nations' envoy to Yemen said the war-torn country is at a “critical juncture”, calling on warring parties to work towards a de-escalation in fighting.
News ID: 80455 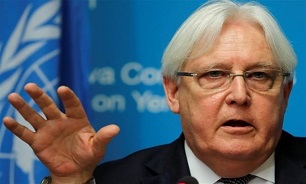 "Yemen is, in my view, at a critical juncture: we will either silence the guns and resume the political process, or we will slip back into large-scale conflict," Martin Griffiths said during a recent visit to Marib province, the official website of the UN reported.

"Fighting needs to stop now," he told reporters, according to a transcript provided by his office.

Fierce battles have resumed in al-Jawf province since last month and culminated with Yemeni troops taking control of its capital al-Hazem last week, as the Saudi-led coalition continued its airstrikes against the impoverished Arab country.

At least 30 Saudi-led forces, including high-ranking officers loyal to fugitive fomer president Abd Rabbuh Mansour Hadi, were killed in the fighting over the past week.

The capture of the strategic city of al-Hazm has been described as a potentially “game-changing” development, enabling the Yemeni forces to surround the strategic oil-rich Ma’rib province.

Saudi Arabia launched its war on Yemen in March 2015, with the goal of bringing back to power the government of Hadi and crushing the Houthi Ansarullah movement.

The US-based Armed Conflict Location and Event Data Project (ACLED), a nonprofit conflict-research organization, estimates that the Saudi war has claimed more than 100,000 lives since the war broke out.