TEHRAN (defapress) – The Iranian Army Ground Force’s Airborne Division is ready to assist the administration in disinfecting cities across the country, the commander of the force said.
News ID: 80522 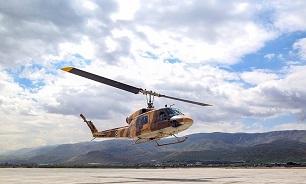 “Since the first day of the coronavirus outbreak, all bases of the Army Ground Force’s Airborne Division in the country have disinfected all passageways and streets in the area they had been stationed via their anti-pollution equipment,” General Yousef Qorbani said.

“In all the bases, we have prepared helicopters for disinfection of the aerial routes, which God willing, will be carried out upon the command and approval of the General Staff,” he added.

The Airborne Division sides with the people in all crises, and the people should spend these days patiently and listen to the medical instructions of the Ministry of Health, the commander went on to say.

In an instruction to Chief of Staff of the Iranian Armed Forces Major General Mohammad Hossein Baqeri on Thursday, Leader of the Islamic Revolution Ayatollah Seyed Ali Khamenei praised the services of the Armed Forces provided for the people to counter the novel coronavirus and stressed the need to organize the services through establishing “a health and treatment base”.

“The division of duties and missions of the organizations and departments of the Armed Forces would be one of the tasks of this base,” Ayatollah Khamenei stated.

“It (the health base) should work in full coordination with the administration and the Ministry of Health,” the Leader added.

“Given that there is evidence that raises the possibility of this event being a biological attack, this measure can also be an exercise in biological defense and increase national power and might,” Ayatollah Khamenei said.