US Halts Deployment, Recalls Troops from NATO Drill Due to Coronavirus

TEHRAN (defapress) – The Pentagon announced it will drastically reduce the “size and scope” of its participation in the NATO ‘Defender Europe 2020’ exercise, stopping just short of calling quits on the much-touted drill set to run until May.
News ID: 80538 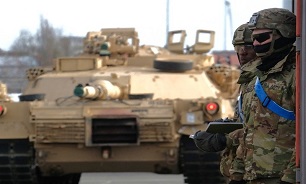 Some 20,000 American soldiers, who were expected to form the backbone of the massive 37,000-strong drill involving forces from 18 NATO member states, will now either stay home or – for those already moved into Europe – return to the US, RT reported.

"As of March 13, all movement of personnel and equipment from the United States to Europe has ceased,” US Army Europe confirmed in a press release on Monday. "As we make the appropriate adjustments, the linked exercises to Exercise Defender-Europe 20 – Dynamic Front, Joint War fighting Assessment, Saber Strike and Swift Response – will not be conducted."

"Forces already deployed to Europe for other linked exercises will return to the United States".

The US European Command carefully avoided spelling out the number of troops that would take part in the scaled-down exercise, saying that "many details (are) still being worked and discussed with our Allies and partners."

However, it expressed hope that at least "the armored brigade combat team already deployed to Europe will conduct gunnery and other combined training events with Allies as part of a modified Allied Spirit exercise."

Instead, the Pentagon emphasized its unprecedented commitment to “alliances and partnerships” and boasted of 6,000 soldiers and 3,000 pieces of equipment it had already moved to Europe – while admitting that “changes are anticipated to the deployment timelines” now, due to the abrupt need to send everything back."The health, safety and readiness of our military, civilians, and family members is our primary concern".

According to earlier reports, the Patriot carrier vessel – a cargo ship supposedly delivering US military equipment to Europe for the drills – has already changed its route and is returning to the States. Satellite data on its position last released on March 13 showed it was sailing east of the Azores Archipelago and was still on its way to Belgium. Two other ships involved in transporting US military equipment as part of the drill have been docked in the Dutch port of Vlissingen for quite some time – yet, they have not been unloaded.

Meanwhile, other nations also followed suit, as Germany said it would reduce its participation by 250 soldiers and opt out of certain drills in April.

Initially, Defender Europe was expected to be the largest NATO exercise in 25 years, with the bulk of the drills scheduled for April and May. The training should have taken place in six European states – Belgium, the Netherlands, Germany, Poland, Lithuania, Latvia and Estonia.

The goal was to practice a US troop deployment to Europe, as well as fending off a potential large-scale aggression. The US military and top officials in NATO said that the maneuvers are not directed against any particular country. Still, the drills were criticized by Moscow, which called them provocative.

Russia’s Foreign Minister Sergey Lavrov earlier said that Russia does not foresee any problems in the Baltics that would require a military solution, adding that the exercise only showed NATO's unwillingness to ease tensions with Moscow.