TEHRAN (defapress)- The US has weaponized the coronavirus pandemic to blast Damascus' efforts and to supply its friendly armed groups with UN aid, instead of helping refugees, the Russian and Syrian militaries announced.
News ID: 80774 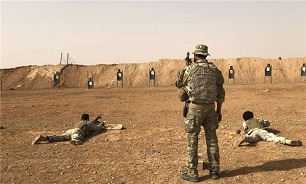 The head of Russia’s HQ coordinating the return of Syrian refugees, Mikhail Mizintsev, and his Syrian counterpart, Hussein Makhlouf, made their joint statement on Friday, according to RT.

The US continues to cynically exploit the global problem [of COVID-19] to discredit the Syrian government by launching a propaganda campaign about its inability to effectively combat the spread of the coronavirus in the country.

The officials pointed out that so far only 19 people have tested positive for the coronavirus in the government-controlled areas. The World Health Organization (WHO) announced earlier this month that it is “working closely” with Syria's Health Ministry to enhance the nation's preparedness and response to COVID-19.

Meanwhile, Mizintsev and Makhlouf accused the US of pinning “the responsibility for the worsening of the epidemiological situation in places like the Rukban and al-Hol refugee camps” on Damascus.

The Rukban camp is located in the middle of a desert in Syria's Southeast near the US al-Tanf military base and the Syrian-Jordanian border. The camp lies within the 55km (34 miles) ‘deconfliction zone’ set up by American troops. Al-Hol is in the far Northeastern part of the country, bordering Iraq, in the area controlled by Washington-backed Syrian Democratic Forces (SDF).

The chiefs of Russia's and Syria's HQs working on the return of the refugees argued that, according to international humanitarian law, the US is “fully responsible” for aiding the refugees on the territory it controls.

At the same time, unlike the areas governed by Damascus, the US-controlled parts of Syria “have no disease control whatsoever”, they warned.

Citing testimonies of the refugees coming from the al-Tanf zone, the Russian and Syrian officials said that people in Rukban “have practically no chance of survival should an epidemic start, because the medical aid stations are closed, and there are no drugs and qualified doctors”.

Russia and Syria have repeatedly urged Rukban to be evacuated, and the UN expressed readiness to facilitate the process. However, as the statement points, Washington has failed to cooperate with the efforts to get the refugees out of the camp and has effectively disrupted the evacuation process. The US State Department has denied these allegations in the past, insisting that it does not stop anyone from leaving Rukban.

Russian and Syrian officials also noted that it is “beyond hypocritical” of the US to demand the Syrian government to improve the humanitarian situation on the ground, all while “maintaining the illegal US sanctions that hamper the revival of the healthcare system in Syria”.

Over the weekend, the US-led coalition announced that it had delivered around $1.2 billion worth of COVID-19 prevention equipment to two hospitals, as well as to the SDF to help them run detention centers for the Islamic State of Iraq and the Levant (ISIL, ISIS or Daesh) terrorists in Syria's Al-Hasakah Province, where al-Hol is also located.

Mizintsev and Makhlouf argued that the US could have just as well been delivering the much-needed aid to Rukban and al-Hol on a regular basis.

“The answer is obvious: the Americans' true goal is to provide the UN-delivered food and other vital goods to the militants they control,” they added.

The UN has long been warning about the abysmal living conditions in Rukban and al-Hol, where people are forced to endure the lack of basic supplies, food, and severe weather. Last year, UN Refugee Agency (UNHCR) Spokesperson Andrej Mahecic described Rukban as “a no man's land”, where “even the most basic healthcare does not exist and overall health conditions are catastrophic”.