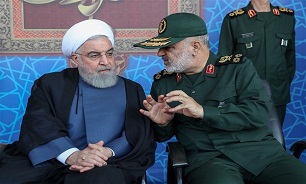 In a telephone conversation with IRGC Commander Major General Hossein Salami on Friday, Rouhani hailed the launch of Noor (light) satellite as a “valuable national success”, asking the general to convey his gratitude to the IRGC Aerospace Force personnel and experts.

The president also lauded the IRGC forces for their leading role in the fight against the novel coronavirus, such as by providing medical services in the national screening scheme and treating coronavirus patients.

He further deplored the provocative measures from the foreign forces in the region and stressed the need for vigilance in dealing with such activities, adding, “The defensive power, capability and preparedness of the country’s Armed Forces, particularly the IRGC, has always been within the framework of protection of stability and security and the fight against terrorism in the region.”

For his part, the IRGC chief expressed hope that Iran will mark more achievements and successes in the military sphere in future.

Major General Salami further briefed the president on the IRGC’s nationwide activities in the battle with COVID-19, and underlined that his forces are fully prepared to stand against the enemy’s excessive demands, fight against terrorism, and ensure sustainable stability and security in the region.

The Islamic Revolution Guards Corps on Wednesday successfully put Noor (light) into orbit. The homegrown satellite was launched with a three-stage satellite carrier, dubbed Qassed (messenger), from a launch pad in Dasht-e Kavir, a large desert in central Iran.