TEHRAN (defapress) – Senior diplomats from Iran and Afghanistan agreed to establish a joint delegation to probe into a recent incident at the common border that has resulted in the deaths of Afghan migrants trying to cross into Iran illegally.
News ID: 81071 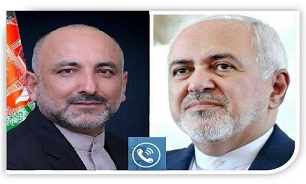 In a telephone conversation on Sunday evening, Iranian Foreign Minister Mohammad Javad Zarif and caretaker of the Foreign Ministry of Afghanistan Hanif Atmar discussed the latest developments in Afghanistan and a regional initiative for peace in that country.

The two diplomats also agreed on the formation of a joint delegation to investigate a recent incident at the common border.

Last week, Afghan news media claimed that about 50 Afghan migrants crossing into Iran illegally have been beaten and thrown into a river.

Iran’s Foreign Ministry spokesman affirmed later that the incident has taken place on Afghan soil, saying, “The Islamic Republic of Iran’s Border Police has denied that any happening in relation to this has taken place on the soil of our country.”

“Considering the significance of the issue and in order to obtain detailed information about how the incident occurred on Afghan soil, we have been probing into the issue in cooperation with the officials of that country (Afghanistan),” the spokesman has said.