TEHRAN (defapress)- North Korea announced on Monday that it had readied thousands of balloons and millions of leaflets in preparation for "retaliatory punishment" against South Korea.
News ID: 81381 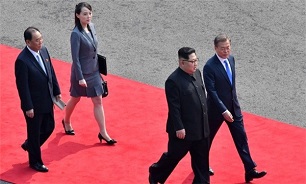 The detail, in a state media report, came a day after North Korea announced it was preparing to begin an anti-South Korea leaflet campaign following a series of vitriolic condemnations of Seoul because of anti-North Korea leaflets floated across the border, Al-Jazeera reported.

Defectors in South Korea send such leaflets which criticise North Korea's leader Kim Jong-un for human rights abuses and his nuclear ambitions. The messages are usually attached to balloons or floated in bottles.

"The preparations for the largest-ever distribution of leaflets against the enemy are almost complete," a report by the Korean Central News Agency said.

"Publishing and printing institutions at all levels in the capital city have turned out 12 million leaflets of all kinds reflective of the wrath and hatred of the people from all walks of life," it added.

More than "3,000 balloons of various types, capable of scattering leaflets deep inside South Korea, have been prepared", along with other means of distribution, KCNA added.

Inter-Korean relations have been frozen for months, following the collapse of a summit in Hanoi between Kim and US President Donald Trump early last year over sanctions relief.

South Korea's President Moon Jae-in initially brokered a dialogue between Pyongyang and Washington, but North Korea now blames him for not doing enough to persuade the US to ease sanctions.

"South Korea has to face the music. Only when it experiences how painful and how irritating it is to dispose of leaflets and waste, it will shake off its bad habit," KCNA said, adding, "The time for retaliatory punishment is drawing near."

Last Tuesday, North Korea blew up an inter-Korean liaison office on its side of the border. It has also threatened to bolster its military presence in and around the Demilitarized Zone (DMZ).

North Korea is planning a large-scale military parade to mark October's 75th anniversary of the founding of the ruling Workers Party at which it could showcase its latest missile development, Yonhap News agency reported citing the Defence Ministry in Seoul.

The defense ministry announced new buildings were under construction at the Mirim airfield in Pyongyang.

South Korea has also warned of a "thorough crackdown" against activists sending anti-North Korea leaflets. It filed a police complaint against two defector groups over the messages that have offended Pyongyang.

The two Koreas remain technically at war. The Korean War ended with an armistice in 1953, but it has never been replaced by a peace treaty.