TEHRAN (defapress)- Iranian Ambassador and Permanent Representative to the United Nations Majid Takht Ravanchi blasted the US purposeful violation of the Joint Comprehensive Plan of Action (JCPOA) and the UNSC Resolution 2231, and said that Washington's unilateralism is threatening the UN's authority.
News ID: 81887 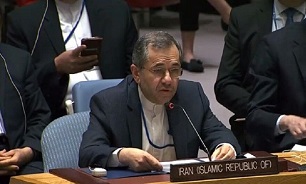 "US is in violation of JCPOA & UNSCR 2231; deliberately misinterprets 2231 & threatens UN members—including its closest allies—for standing up to bullying," he added.

"US's unilateralism is undermining UN. Council's authority is on the line," he added.

In relevant remarks earlier this week, Iranian Vice-President for Legal Affairs Laya Joneidi stressed that given the US withdrawal from the nuclear deal and Iran’s respect for the international agreement, Washington will not be able to use the trigger mechanism against Tehran at the UN Security Council.

“If we want to refer to an agreement, we should be committed to it first or be a member of it or be an active side, the US is not under such terms vis-a-vis the nuclear deal,” Joneidi told reporters in Tehran.

She added that based on articles 10 and 11 of the UNSC 2231 resolution, the precondition for raising Iran’s issue at the UNSC is that the US should itself have remained committed to the nuclear deal.

Joneidi said that the substantive problem of the issue is that the precondition for returning the sanctions against Iran is that the country should have violated the nuclear deal before the US withdrawal but as confirmed by the UN, Tehran remained committed to it even one year after Washington’s withdrawal, adding that her country’s gradual scaling down of its undertakings was also based on the article 36 of the nuclear deal.

“We expect the UNSC to work based on a logical interpretation,” she said.

The United Nations Security Council resoundingly rejected on Friday the second US bid to extend an arms embargo on Iran, which is due to expire in October.

In relevant remarks on Sunday, Iranian Foreign Minister Mohammad Javad Zarif said it is by no means justifiable for the US to use Dispute Resolution Mechanism with regard to UNSC Resolution 2231.

"US recourse to Dispute Resolution Mechanism in 2231 has NO LEG TO STAND ON," Zarif wrote on his Twitter page late Sunday.

"AmbJohnBolton has repeated today what he said on May 8, 2018, while National Security Advisor in the Trump administration," he noted, adding, "At least he is consistent—a trait notably absent in this US administration."

Zarif' tweet came in reaction to former US National Security Advisor John Bolton's article in Wall Street Journal where he criticized US' decision to trigger ‘snapback mechanism’ against Iran, saying, "The agreement [Joint Comprehensive Plan of Action]’s backers argue that Washington, having withdrawn from the deal, has no standing to invoke its provisions. They’re right. It’s too cute by half to say we’re in the nuclear deal for purposes we want but not for those we don’t."