Joint Commission should be an opportunity to safeguard JCPOA 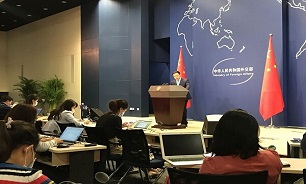 Speaking in his weekly press briefing on Monday, he expressed hope that the commission would work to resolve disputes over the implementation of JCPOA within the framework of the Joint Commission, coordinate efforts to address current challenges, and continue the political process of resolving Iran’s nuclear issue.

Chinese Foreign Ministry spokesperson added, “Tension around Iranian nuclear issue has been mounting because of the US unilateral withdrawal from JCPOA in May 2018 and a series of actions it has taken unilaterally and illegally against the international rejection. The JCPOA has come to a crucial juncture. China hopes that all parties will take the Joint Commission meeting as an opportunity to further commit ourselves to firmly safeguarding the JCPOA and faithfully implementing the Security Council Resolution 2231, properly handle differences on JCPOA implementation under the framework of the Joint Commission, coordinate efforts to address the current challenges, and continue to move forward the political settlement process of Iran’s nuclear issue.”

JCPOA has reached a "crucial juncture", he said, adding, “A meeting of the JCPOA Joint Commission at the level of political directors will be convened in Vienna from August 31 to September 1. In this meeting, JCPOA participants will evaluate the current state of the Iranian nuclear issue, review the implementation of the JCPOA, and coordinate next steps.”

As headed by Secretary-General of the European Union External Action Service Helga Schmid, the JCPOA Joint Commission meeting will be held today in the presence of Iranian Deputy Foreign Minister for Political Affairs Seyyed Abbas Araghchi and representatives of countries including France, Germany, UK, China, and Russia in the Austrian capital Vienna on Tuesday.