TEHRAN (defapress) – Syrian firefighters and army aided with a fire airplane belonging to the Islamic Revolution Guards Corps Aerospace Force have been battling wildfire for over a week in mountainous area of Latakia as well as some areas in Hama province.
News ID: 82001 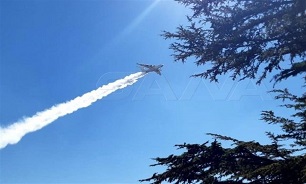 The Iranian fire airplane joined Syrian army helicopters as well as their firefighters in Latakia and Hama provinces to extinguish fire in the regions of Masyaf and Al-Ghab, including the Haraj fire in the Shatah Mountains of Hama province.

The Syrian army is also combatting a blaze ravaging a mountainous area in al-Haffah in Latakia ptrovince.

High temperatures and winds have been blamed for the blaze. Uneven and rugged roads have limited the access of emergency forces to the blaze, slowing the firefighting operations.

According to SANA news agency, the Iranian aerial fire extinguisher played a decisive role in putting out most of the fires that broke out in the mountain areas of Syria by pouring 40 tons of water in every flight.