TEHRAN (defapress) – US President Donald Trump has threatened to strike Iran “1000 times greater in magnitude” following a false report of a US media on alleged Iran plan to assassinate a US diplomat.
News ID: 82018 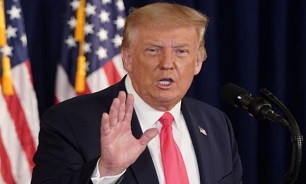 Pointing to the report by Politico, Trump tweeted “Any attack by Iran, in any form, against the United States will be met with an attack on Iran that will be 1,000 times greater in magnitude!”

Citing unnamed US officials, the US outlet claimed that Iran was weighing to assassinate US Ambassador to South Africa Lana Marks in response to the US’ assassination of top Iranian commander, Qassim Soleimani.

Tehran has dismissed the report as ‘lie’. Foreign Ministry Spokesperson Saeed Khatibzadeh urged American officials to “stop resorting to hackneyed and outworn methods to create an Iranophobic atmosphere on the international arena.”

In his tweets, Trump has leveled accusations against Iran by relying on "press reports” which seems totally odd of a person who can access data provided by intelligence agencies. This indicates that whether Trump has a problem with the country’s intelligence services or the Politico’s source does not exist.

Meanwhile, Trump has repeatedly attacked US media as being ‘fake’ and ‘liar’ in recent years, so the question is how come he has put trust in such a report.

The latest polls show that Trump is behind his Democratic rival Joe Biden and these threats can be considered as a tool in his election campaign.

On Trump’s order, General Soleimani, the commander of the Quds Force of Iran’s Islamic Revolution Guards Corps (IRGC), his Iraqi trenchmate Abu Mahdi al-Muhandis, the deputy head of the Popular Mobilization Units, and a group of their companions lost their lives in a US drone strike near Baghdad International Airport on January 3.

The two commanders were highly popular because of the key role they played in eliminating the US-sponsored Daesh terrorist group in the region, particularly in Iraq and Syria.