'Congratulations in advance on Iranians' victory against US' 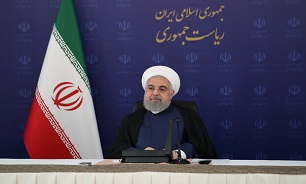 "It is a month that they have been trying to use the mechanism, while the whole world knows that the mechanism can be only used by those who are members of the JCPOA and a participant to it," he added.

"The one who treasonously named the JCPOA the worst deal ever and withdrew from it unilaterally, gave bad words to it, resisted against it and punished whoever implemented the nuclear deal is now seeking to activate the snapback mechanism," Rouhani said.

"The US only wants to cheer on Sunday and Saturday and say that it has succeeded but the next Saturday and Sunday is the day of the victory of the Iranian nation and the disgraceful defeat of the United States."

"The Americans wanted to collapse our economy," he said. "They thought we would lead to economic collapse in June and July. Then they wanted to lead us to social collapse in August. At the end of the autumn, they planned to lead us to a security collapse and enter the country on February 13 and dominate Iran. Such crude and childish thought was in the White House's mind."

"The Americans prepared a new resolution and submitted it to the UN Security Council to prevent the removal of the arms embargo on Iran... they failed to do so, however."

Referring to US efforts to use JCPOA provisions, he said "All members of the UNSC members opposed. Three European countries explicitly opposed it at the ambassadorial level, as well as China and Russia... So America was left alone."

"There are two or three countries in the world that are clung to the White House, one is the Zionist regime besides one or two other small countries."

Rouhani also reacted to Trump's recent claim about Iran's minus 25-percent economic growth, saying that "Of course, Americans talk a lot. The US president said two days ago that Iran has had negative economic growth of 25% in recent months. That is not reasonable. Of course, it may be similar to their own growth rates. Westerners are now witnessing negative growth rates and in some cases the rate hovers above minus  22 percent."

"According to the Central Bank of Iran, our economic growth in the first quarter is higher than -1 percent and stands at -0.6 percent. Our economic conditions and economic growth without oil is -0.6, and we have had positive growth in both agriculture and industry in Q1," the President noted.