'We will target those behind Gen. Soleimani’s assassination'

TEHRAN (defapress) – The commander of the Islamic Revolution Guard Corps said that Iran is serious about taking Martyr Soleimani’s revenge at it will target those behind the assassination.
News ID: 82054 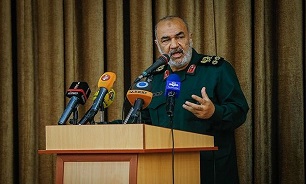 “Mr. Trump! Do not doubt in our revenge because it is completely certain and serious,” Major General Hossein Salami said in a local ceremony on Saturday morning.

Iran will take revenge in a fair manner, said the commander, adding, “This is why we did not target your soldiers at Ain al Asad.”

“We will target those who have had a direct or indirect role in the martyrdom of Lieutenant General Ghasem Soleimani,” said the Major General.

“Americans should know that we will target anyone who has had a role in the cowardly assassination of General Soleimani and this is a serious warning,” he said.

“You are threatening us with a 1000-times greater attack while being stranded in your internal problems, but when we targeted Ain al Asad, we were assuming that you would respond and had then made hundreds of missiles ready to destroy targets in case you would respond.”

He went on to say that the US will receive a strong response if it even harms ‘one hair’ of an Iranian soldier.

“These are serious warnings. We do not engage in a war of words but we leave everything to the field of action.”