Trump 'Much Better' But Doctor Says 'Not Yet Out of Woods'

TEHRAN (defapress) – US President Donald Trump posted a video Saturday from the hospital where he is battling COVID-19, saying he was improving and would be "back soon" -- but acknowledged that the crucial coming days would be "the real test."
News ID: 82187 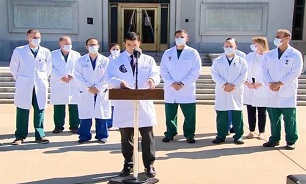 "I came here, wasn't feeling so well. I feel much better now," Trump said from his business suite at the Walter Reed military medical center near Washington, AFP reported.

"We're working hard to get me all the way back... I think I'll be back soon and I look forward to finishing up the campaign the way it was started."

Appearing relaxed in an open-collar shirt and blue suit jacket, Trump acknowledged that there was uncertainty about the course of the disease, which can hit recovering patients hard with no warning.

"I'm starting to feel good. You don't know over the next period of a few days, I guess that's the real test, so we'll be seeing what happens over those next couple of days."

Late Saturday, White House doctor Sean Conley said Trump was "not yet out of the woods," but that the medical team is "cautiously optimistic."

The report from Conley came after a source familiar with the president's health -- later named in US media as White House chief of staff Mark Meadows -- gave a much more worrying assessment.

"The president's vitals over the last 24 hours were very concerning and the next 48 hours will be critical in terms of his care," he said. "We're still not on a clear path to a full recovery."

The White House has not commented officially and Meadows had asked to speak off-the-record before his name appeared as the source in The New York Times and other US outlets.

In his latest update, Conley said Trump had "made substantial progress since diagnosis, and remained "fever-free and off supplemental oxygen."

Trump, 74, had completed a second dose of therapeutic drug remdesivir and had spent "most of the afternoon conducting business," Conley added.

A second doctor, Sean Dooley, said earlier in the day that the president's cardiac, kidney and liver functions were "normal."

Conley was evasive when asked earlier whether the president had received supplementary oxygen at any point since falling ill, only confirming that he hadn't received any at the hospital or on Thursday -- the day of his positive test.

Several US media outlets said Trump was on oxygen at the White House on Friday before being admitted to Walter Reed.