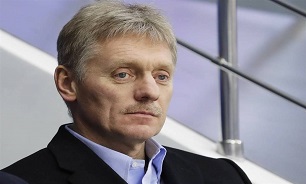 "To our deepest regret, this is a deliberate unfriendly step toward Russia. The Council of the EU has damaged relations with our country by this. Moscow will undoubtedly analyze the situation and act according to its interests," Peskov said, Sputnik reported.

He added that "the sad thing about this is that it is impossible to see any logic in this decision, the absolute lack of logic is what probably makes it even worse, this decision by the Council of the EU".

"All in all, the decision to make relations between the EU and Moscow contingent on a person, whom Europe considers to be the leader of some sort of opposition, is regrettable", the spokesman underscored.

The statement comes hours after the EU published an official decree, sanctioning the head of the Russian Federal Security Service, the first deputy head of the presidential administration and several others over the Navalny case.

The institute was sanctioned as the EU accused GosNIIOKhT of being responsible for the creation of the military-grade nerve agent Novichok, allegedly used against Navalny.

The developments follow Russian Foreign Minister Sergei Lavrov vowing on Wednesday that Moscow would retaliate against the EU sanctions over the Navalny case, also blaming Germans for failing to “provide any facts (related to the opposition figure’s alleged poisoning), despite all their international legal obligations”.

“We will answer in kind. Yes, this is diplomatic practice, but it is also a diplomatic response", Lavrov underscored.

The foreign minister's remarks were preceded by Russian President Vladimir Putin stressing during a phone conversation with his French counterpart Emmanuel Macron last month that groundless accusations against Moscow regarding the situation around Navalny were unacceptable, and that Germany needed to share its case materials with Russia so that the situation could be clarified.

Earlier, Moscow stated that Russian doctors had found no toxic substances in Navalny's system before he was transported to Germany, adding that Berlin had provided no evidence to support its claims that the opposition figure’s condition was the result of poisoning by a military-grade nerve agent from the Novichok group.

Russia underscored that it had not produced any Novichok group substances since the Organization for the Prohibition of Chemical Weapons (OPCW) verified the destruction of the country's chemical weapons stocks in the early 1990s.

Navalny fell gravely ill while on a flight from Siberia to Moscow on 20 August. He was then placed in a hospital in the Siberian city of Omsk, where Russian doctors waged an uninterrupted struggle for his life, as he went into a coma and was put on an artificial lung ventilator. Two days later, Navalny was transported to the Berlin-based Charite clinic for further treatment.