TEHRAN (defapress) – The Islamic Revolutionary Guards Corps (IRGC) forces managed to capture a haul of weaponry in the northern province of Mazandaran, which had been smuggled into the country in order to be used for anti-security moves.
News ID: 82378 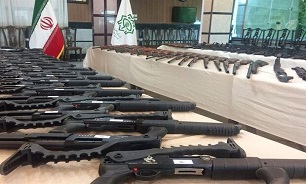 Colonel Mohammad Barmar, the head of Fereydoonkenar IRGC, broke the news on Sunday, saying that the elite forces, in cooperation with the public prosecutor of Mazandaran, seized a taxi sedan and a truck in the northern city and discovered 64 riot guns and firearms.

He noted that two people have been arrested on charge of smuggling the weapons and will face trial.