TEHRAN (defapress) – The Group of 77 (G77) and China called for the preservation of the 2015 nuclear deal between Tehran and world powers and the removal of anti-Iran sanctions, adding that the unilateral economic measures have had negative effects on the Iranian nation’s prosperity.
News ID: 82525 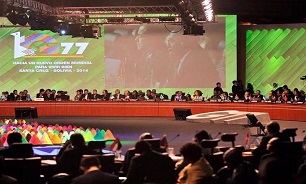 “The Ministers reaffirmed the importance of supporting and strengthening multilateralism, and, in this regard, recognized that the Joint Comprehensive Plan of Action (JCPOA) between the Islamic Republic of Iran and the other parties is a concrete case of a successful multilateral action for resolving outstanding global issues, stressed that such model sets a real example for further accelerating the achievement of sustainable development including by strengthening international co-operation, through enhanced means of implementation,” the foreign ministers of the coalition of 134 developing countries plus China said in a recent statement.

The statement followed the 44th annual meeting of the group, which was held via a virtual platform.

Iran has been under a series of illegal sanctions imposed by Washington since 2018 when US President Donald Trump withdrew his country from the 2015 nuclear deal, officially known as the Joint Comprehensive Plan of Action (JCPOA).

The US unleashed the so-called maximum pressure campaign and targeted the Iranian nation with the “toughest ever” restrictive measures.

In recent months, Washington has been tightening its oppressive sanctions against the Islamic Republic, defying warnings from Tehran and international human rights organizations that the restrictions are severely hampering the Iranian health sector's fight against the coronavirus outbreak.