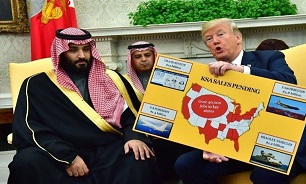 The friendship between the US and Saudi Arabia has grown warmer as Trump placed the kingdom at the heart of his Middle East policy, backing its stance against Iran and encouraging its purchase of US-made weapons.

However, NBC News disclosed that Biden has pledged to "reassess" the US relationship with Saudi Arabia, reporting that it would likely have a less privileged and personal relationship with the Biden administration than it had with the Trump team.

Trump also stood beside the crown prince of the kingdom when the CIA found that he had ordered the brutal killing of Saudi journalist Jamal Khashoggi in Istanbul in October 2018.

But Biden has described Saudi Arabia as a "pariah" and has confirmed that he believes Khashoggi was murdered on the orders of the crown prince.

Biden vowed to end US support for the Saudi war on Yemen, which has so far has killed more than 112,000 people and spawned the world's worst humanitarian crisis, leaving millions suffering from food and medical shortages.

The US president-elect has also suggested that he would stop selling weapons to Riyadh and pledged to defend the rights of political dissidents, the report said.