TEHRAN (defapress) – The administrative coordinator of the Daesh terror group has been arrested at Baghdad International Airport, the spokesperson for the Commander in Chief of the Iraqi Armed Forces said.
News ID: 82623 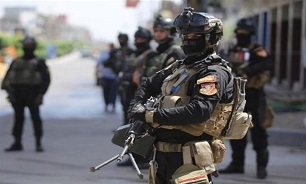 Major General Yahya Rasool said on Monday the Iraqi Counter-Terrorism Service had been tracking the terrorist known as "Abu Nabaa" until he arrived in Iraq where he arranged to meet with the group's members in the outskirts of Baghdad.

"Abu Nabaa has been known for his terrorist activity since 2003 when he belonged to several terrorist organizations, most notably Al-Qaeda and ISIS (Daesh), and was receiving written instructions from the group's so-called governor of Iraq," General Rasool said, according to the Middle East Monitor.

"He (Abu Nabaa) was responsible for managing and coordinating the terrorist group's activities in Iraq and forming security, military and media attachments within the Baghdad governorate," the spokesman said, adding that "the operation was carried out in complete secrecy and with great success."