TEHRAN (defapress) – The Iranian MPs approved the outlines of a bill on “strategic action” for lifting of the sanctions and safeguarding national interests in a move that the Parliament speaker described as an end to a one-way game.
News ID: 82691 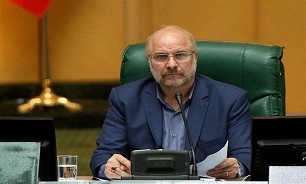 “By ratifying the outlines of the motion, the Parliament sent the enemies of Islamic Iran the message that the one-way game is over,” Speaker of the Iranian Parliament Mohammad Baqer Qalibaf said on Tuesday after the lawmakers overwhelmingly endorsed the outlines of the strategic measure for the removal of sanctions and protection of the interests of the Iranian nation.

Supporters of the motion said they have proposed the bill after a phased reduction in Iran’s commitments to the JCPOA and the Iranian president’s warning to the EU3 about their support for the constant intensification of cruel American sanctions against Tehran.

According to the 9-artilce bill, the Atomic Energy Organization of Iran will be required to produce and store at least 120 kilograms of enriched uranium with 20 percent purity level at the Fordow nuclear facility every year, and to fulfill the country’s peaceful industrial demands with uranium enriched above 20%.

Once ratified, the bill will oblige the AEOI to increase the monthly output of enriched uranium for various peaceful purposes with different purity levels by at least 500 kg.

The motion also entails uranium enrichment activities with at least 1,000 IR-2M centrifuge machines at Natanz within three months after ratification of the law, and compels the AEOI to launch uranium enrichment as well as research and development activities at the Fordow nuclear site with at least 164 IR-6 centrifuges and increase the number of centrifuge machines to 1,000 by March 2021.

The new bill also necessitates the inauguration of a metallic uranium factory in Isfahan within 5 months and restoration of a 40-Megawatts heavy water reactor in Arak, which was supposed to be re-designed and optimized under the JCPOA.

According to the parliamentary bill, the Iranian government will be required to prevent any foreign access and monitoring beyond the Additional Protocol.

If the JCPOA parties fail to honor their commitments or refuse to lift the anti-Iranian sanctions until three months after ratification of the bill, and if Iran’s banking ties with Europe or the oil purchases from Iran are not normalized until then, the Iranian administration will be required to suspend the voluntary implementation of the Additional Protocol of the Nuclear Non-Proliferation Treaty (NPT), the motion says.