TEHRAN (Defapress) - Advisor to the chief commander of IRGC, Brigadier General Esmail Kosari, reiterated that the Islamic Republic of Iran will not negotiate on conventional defense weapons at all.
News ID: 83035 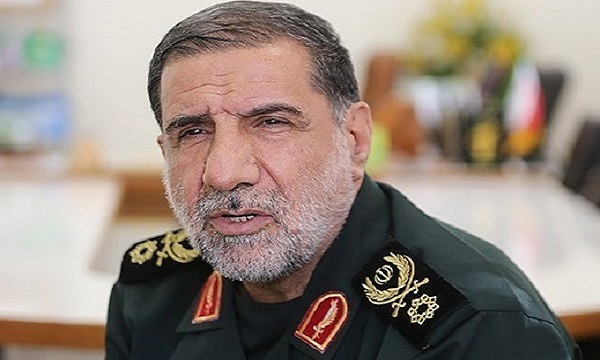 In an interview with the Yemeni network Al-Maseera, the advisor to the Commander-in-Chief of the Islamic Revolutionary Guard Corps (IRGC) Brigadier General Esmail Kosari stressed that Iran will respond vigorously to any aggression against its territory.

"Conventional defense weapons are our right and can absolutely not be negotiated, and this is what all agree on [inside the country]," Kosari said.

"Iran has never sought war," he also said, adding that "Iran has the defense power to prevent any aggression and will vigorously defend its territory against any aggression."

"We will comply with the nuclear commitments under the [JCPOA] agreement only if the other parties adhere to their commitments in practice, not orally."

Iran on Monday said it had informed the UN nuclear Agency (IAEA) that it would cease voluntary implementation of the Additional Protocol on February 23 in continuation of taking steps away from the JCPOA commitments amid the indifference of the European parties to the deal towards the US violations of the deal and imposition of illegal sanctions after 2018 exit.

After the illegitimate US exit from the JCPOA in May 2018, the European countries remained indifferent to making up for Iran’s losses in violation of the deal forcing Tehran to reduce its JCPOA commitments.

The Iranian parliament passed a bill, dubbed the Strategic Action Plan to Counter Sanctions in early last December, setting a Feb. 21 deadline for Biden to lift the US sanctions. Otherwise, Iran will halt implementing the additional protocol.

Iran has so far resumed 20% uranium enrichment at Fordow plant in accordance with the Parliament’s legislation and has warned that in the case Washington does not remove all the anti-Iran illegitimate sanctions, it will also stop voluntary implementation of the Additional Protocol, which gives IAEA inspectors unannounced visits to Iranian facilities.