TEHRAN (Defapress) - A crew member says that "The day before the incident, an unidentified helicopter above scouted Saviz for 5 to 10 minutes."
News ID: 83203 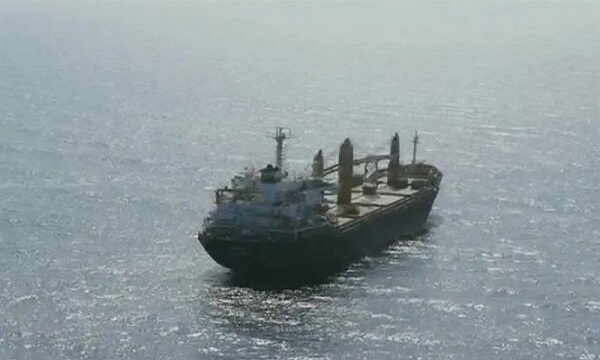 On Tuesday, April 5, the Iranian ship Saviz was attacked off the coast of Djibouti in the Red Sea.

"The day before the incident, an unidentified helicopter scouted Saviz ship for 5 to 10 minutes," one of the ship's crew told Noornews.

The source added, "On the day of the incident, more than 4 hours after the attack on the ship, from 10:00 to 11:00 local time, two unidentified speedboats were scouting near the ship."

Also in this regard, the Iranian Foreign Ministry spokesman Saeed Khatizadeh told reporters that the Saviz ship was struck by a blast at around 6 a.m. local time (0300 GMT) on Tuesday, April 5, near the coast of Djibouti, and sustained minor damage.

In accordance with the previous official announcement and in coordination with the International Maritime Organization (IMO), the non-military Saviz ship was stationed in the Red Sea and the Gulf of Aden to provide maritime security and to protect Iranian merchant ships against piracy.

The ship has acted as Iran’s logistic station in the Red Sea and the Gulf of Aden, and its mission had been announced to the IMO.

The Iranian Press TV website cited a New York Times story published on Wednesday quoting an anonymous US official telling the newspaper that the Tel Aviv regime notified the United States that Israeli forces had attacked an Iranian ship in the Red Sea.

The unnamed US official said Israel called the strike a retaliation, and that the ship had been hit below the waterline.

In a similar incident last month, an Iranian cargo ship was damaged after it was targeted by a terrorist attack en route to Europe in the Mediterranean Sea.