TEHRAN (Defapress) - A great number of Iranian and Afghan students as well as some people convened in front of Afghan Embassy to the Islamic Republic of Iran and strongly condemned recent terrorist attack on Sayyid al-Shuhada School, west of Kabul.
News ID: 83334 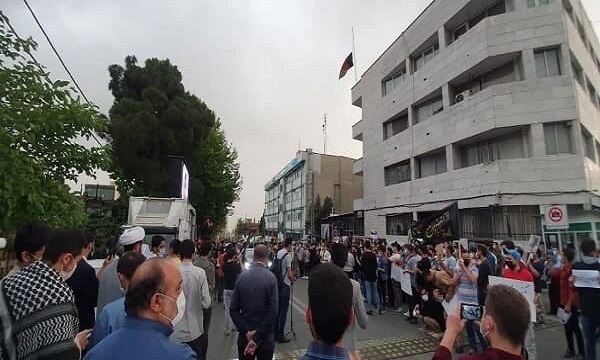 The demonstrators carried pictures of martyrs and black flags to express their disgust and detestation with the crimes committed by terrorists in Afghanistan.

The demonstrators blamed the enemies of Islam especially the United States, Zionist regime and Britain as the main perpetrators of these heinous crimes against the Afghan people and expressed their disgust with the international community's silence on this crime.

At the end of the ceremony, a group of students issued a statement and expressed their sympathy with the Afghan people and condemned this barbaric act, emphasizing the need for revenge against the enemies, spread of peace, security and unity among people of the region, as well as expelling foreign troops from Afghanistan and other countries.

On Saturday, a car bomb and at least two other blasts detonated near the school gates just as the girls and young women were streaming out.

The terrorist attack on the Sayyid al-Shuhada school in the west of Kabul that killed more than 60 schoolgirls and their teachers.