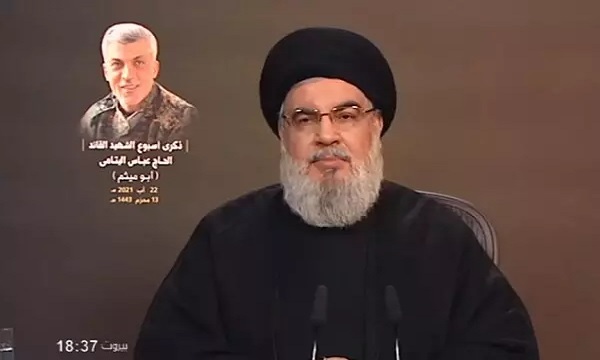 Nasrallah said at the start of his speech, according to Al-Manar that, "I have known Martyr Abbas Al-Yatama closely, he’s one of Hezbollah founders."

According to Al-Manar, late Hezbollah commander Al-Yatama participated in liberating Aleppo city and Aleppo-Hama highway from the militant, breaking the terrorist blockade imposed on Nubbul and Al-Zahraa cities, and engaging in a large number of battles against the takfiri groups across Syria.

It is worth noting that Al-Yatama passed away last week due to complications related to COVID-19 infection.

In his speech, the Hezbollah leader recalled some of Martyr Yatama’s traits and accomplishments during his service in Hezbollah ranks.

The secret behind the Resistance strength is that it never strived after gains here and there, according to Nasrallah.

According to Hezbollah leader, the US ambassador and her predecessors are running the whole battle against the resistance and the real national forces, as WikiLeaks and other intelligence documents proved that.

He also touched upon supplying fuel to Lebanon by Iran amid the fuel crisis, saying “I announced previously that the first fuel ship would sail within hours, I announce now that the second one would sail in few days.”

He said that the more ships carrying fuel from Iran will follow as long as the crisis persists.

Nasrallah added that all claims regarding where will the vessel dock are mere jabbering, adding, “I’ll be declaring the technicalities in the coming period.”

The goal is to break the black market, prevent monopoly and relieve people’s sufferings, according to Hezbollah leader.

The fuel oil we’ll bring is for all the Lebanese, not for Hezbollah or Shiites exclusively, he noted.

He added, “There are companies ready to extract oil and gas from Lebanese water and sell it.”

Hezbollah chief also noted that other countries expressed willingness to help but they were being vetoed by the US.