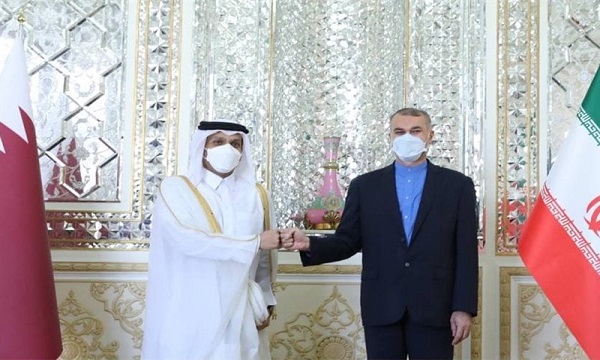 During the meeting, the Qatari foreign minister conveyed the greeting and congratulations of high-ranking Qatari officials to the Iranian side and wished success to the new president and the new government of Iran, a statement by the Iranian Foreign Ministry said.

In addition to discussing regional issues and expressing Iran's view on the need to strengthen the dialogue factor in the region, the two foreign ministers discussed important bilateral issues.

Regarding the developments in Afghanistan, the Iranian foreign minister Amir-Abdollahian stressed that the United States is the cause behind the suffering of the Afghan people, adding that an inclusive government with the participation of all Afghan groups is the only solution to the current situation.

Sheikh Mohammad bin Abdulrahman Al-Thani arrived in Tehran on Thursday morning at the head of a Qatari delegation.

It is noteworthy that Al-Thani's visit comes after his country hosted the US Secretary of State Anthony Blinken and Secretary of Defense Lloyd Austin over the past few days.