TEHRAN (Defapress) - In a statement on Thursday, a day before the anniversary of Quds Day, the Iranian Ministry of Foreign Affairs called on nations in the world especially the people of Iran, to participate in Quds Days rallies on Friday.
News ID: 84104 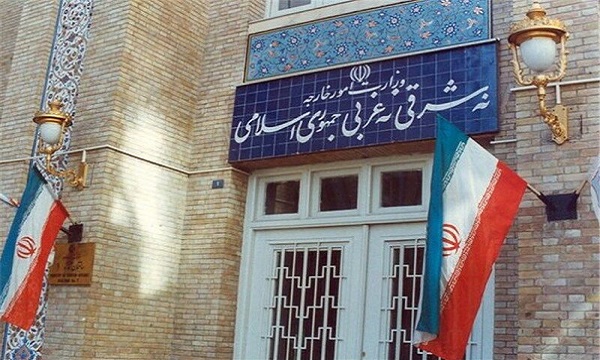 In its statement, the Iranian foreign ministry recalled that the founder of the Iranian Islamic Revolution introduced the International Quds Day and described the day as a symbol of the unity and integrity of the Islamic world and a symbol of defending the Palestine cause and supporting the struggles of the oppressed people of Palestine against the Zionist occupiers.

The foreign ministry further points to the recent atrocities in holy Quds and the Israeli regime and the Zionist settlers on Al-Aqsa Mosque, saying that the crimes of the Zionist regime in recent days in Al-Aqsa Mosque and its attack on the holy sites of the first qibla of Muslims is a blatant affront to feelings of Muslims around the world which is widely condemned by Muslim communities.

According to the Iranian ministry, holding a referendum with the participation of all the genuine residents of Palestine remains the only practical and democratic solution for the determination of the destiny and future of Palestine.

The following is the full text of the Iranian foreign ministry's statement on Quds Day:

In the name of God, the Most Compassionate, the Most Merciful

The World Quds Day, as the legacy of the dignified founder of the Islamic Revolution, symbolizes unity and consolidation in the Muslim world and exemplifies the commemoration of the sublime cause of Palestine as well as support for the struggles of the oppressed and innocent Palestinians against the Zionist occupiers. The World Quds day has now turned into a historical event, thanks to the efforts of the world’s freedom-seekers, on the way of freedom-seeking and justice-hunting struggles against the Zionist apartheid regime and its supporters.

This great occasion in the calendar of the Muslim world has become prevalent and spotlighted across the globe as it provides, every year, hope and promise for the righteous people against and in disavowal of the Zionist occupying, usurper and apartheid regime. Today, the issue of Quds is not only an Islamic issue, but a global and human concern which has become the benchmark and measure for freedom-seeking in a manner that, according to the remarks of the wise leader of the Islamic Revolution, defending Palestine today is equal to defending the truth; a truth more inclusive than the issue of Palestine.

We are commemorating the Word Quds Day under circumstances in which the crimes and murders of the recent days by the Zionist regime in Al-Aqsa Mosque and violating the integrity and sanctity of the first Muslim qiblah have provoked grievance among the Muslims of the world who have condemned such atrocities. Even though the Zionist regime, in the past years, has resorted to various machinations to undermine the Palestinian cause and make it forgotten, global awareness has been created thanks to the efforts and determination of the world’s justice-seekers in connection with the nature and essence of the Zionist regime and a new wave of declarations and recognition across the world against the Zionist regime as being apartheid in a manner that the betrayal of the Palestinian cause by some Arab and Muslim governments and normalization of relations with the Zionist regime have been a dagger in the back of the resilient nation of Palestine. However, they have failed to take the issue of Palestine off the top agenda of the Muslim world.

The unwelcomed existence of the Zionist regime, right from its inception, has resorted to all types of methods of suppression and plunder of the Palestinian nation and has spared no efforts in committing crimes and murders against the Palestinians. This terrorist regime has displaced millions of Palestinians and replaced them with Zionist settlements and does not even allow refugees to return to their homeland. Murder, detention without reason, torture and humiliation of Palestinians have become prevalent on a daily basis by Zionist regime elements; all such atrocities are happening in view of the absence of a serious measure by the Western governments and international institutions that claim to be pioneers of human rights. It is the legal right of the Palestinian nation to put up legitimate resistance. It should be noted that all such crimes have placed a heavy burden on the shoulders of every single one of the Muslims and freedom-seekers of the world in order to rush to the rescue of the oppressed people of Palestine with their slogans.

The Ministry of Foreign Affairs of the Islamic Republic of Iran, while commemorating the memory of the martyrs of the path of Palestine and resistance, in particular Lieutenant General Qassem Soleimani, and emphasizing the continuation of the principled policy of support for the freedom-seeking struggles of the people of Palestine and confrontation with the occupation of the Zionist usurpers and criminals and the absolute necessity of the formation of the Palestinian government with holy Quds as its capital, declares that holding a referendum with the participation of all the genuine residents of Palestine remains the only practical and democratic solution for the determination of the destiny and future of Palestine.

The Ministry of Foreign Affairs, in response to the historical invitation of Imam Khomeini (May his soul rest in peace) calls on all the world nations, especially the noble, revolutionary and right-seeking nation of Iran to participate in the programs to commemorate the World Quds Day and requests all the Muslim and freedom-seeking nations and governments across the world to put pressure on governments and international official and legal entities to fulfill their legal and human obligations in supporting the rights of the people of Palestine and ending the occupation and brutal murders of the Zionists and their escalatory and transgressive acts in the region and remain persistent on this right path of saving the holy Quds.

May the wish of Muslim nations to congregate in Al-Aqsa Mosque for prayers come true in the near future and the illegitimate Zionist regime be declared terminated with the return of all refugees to their motherland and participation in determining the destiny of Palestine so that the Palestinian nation could taste freedom and independence.