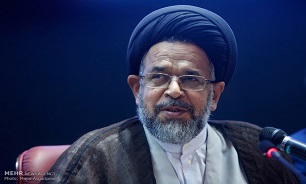 Intelligence Minister Mahmoud Alavi in a televised interview with IRIB on Saturday said the mastermind and main commander of terrorist attacks on Iran’s parliament and the shrine of Ayatollah Khomeini on June 7 had been situated in border areas and fled the country after the operation was crushed and all perpetrators killed.

"With help from friendly intelligence services, the mastermind of the operation who had fled the country was killed by Iranian security forces,” he added.

"Over 100 terrorist plots have been neutralized in Iran; this shows the skill of security, military and police forces that can identify terrorists with no specific features and signs,” he stressed.

Alavi also added that the safe house used by the five terrorists who carried out the attacks in Tehran was discovered by security forces and the brother of one the terrorists, who according to the minister was even more dangerous, was caught by the intelligence forces.

The Iranian minister went on to stress, "ISIL is not our enemy; it’s merely a tool in the hands of our enemies such as the US and a number of European countries which have cooperated with the terrorists [against Iran].”

"Enemies seek to cause insecurity in the region and will continue this path until Israel’s security is provided,” he added.

The Wednesday terrorist attacks on Iran’s Parliament and the Mausoleum of Imam Khomeini left 17 people dead and 50 others injured. ISIL claimed responsibility for both attacks.