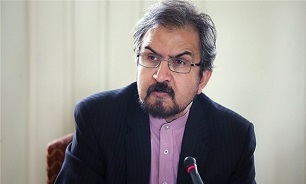 "The way the three peace guaranteeing states (Iran, Russia and Turkey) should supervise the ceasefire is an important and delicate issue which needs expert meetings and the three countries are have consultations to find and finalize its mechanisms," Qassemi said on Sunday.

He said some mechanisms have gone under study, but they now need to be put into force through peace monitoring troops. Yet, he underlined that Iranian peacekeeping forces will not conduct warring operations in Syria as Tehran is resolved to maintain its "advisory role".

Iran, Russia and Turkey reached an agreement earlier this week to establish a special committee to prepare the ground for setting up de-escalation zones in Syria.

The three countries authorized a ‘Special Committee’ to determine technical indexes for the establishment of four de-escalation zones in Syria.

Kazakh Foreign Minister Khairat Abdrakhmanov announced the final document of the fifth round of Astana meeting on Wednesday, including the agreement.

Also, the joint statement issued by Iran, Russia and Turkey at the end of Astana talks indicated noticeable progress in this round.

Special envoy of Russian president in Syrian affairs Alexander Lavrentiev told reporters that the country's military police equipped with light weapons will be stationed in the de-escalation zones.

He added that the group is not from the Russian military units, but they are police force by special responsibility for non-war duties.

Lavrentiev said that representatives of Syrian armed opposition in Astana talks also agreed with the creation of de-escalation zones.