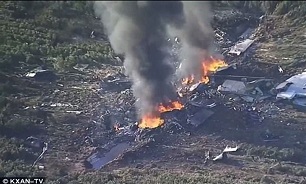 Leflore County EMA Director Frank Randle confirmed that 16 are dead in the crash.

"Most of them are gonna be Marines," he said. He could not confirm whether there were any civilians on the plane, USA today reported.

The US Marine Corps Twitter account posted that "A USMC KC-130 mishap occurred the evening of July 10. Further information will be released as available."

Marine Corps spokeswoman Lt. Kristine Rascicot confirmed that the plane that crashes was a USMC KC-130, but said she was not able to release any more details.

Capt. Sarah Burns said in a statement that a Marine C-130 "experienced a mishap" Monday evening, echoing almost the exact language of the tweet.

A KC-130 aircraft is an extended-range tanker version of the Lockheed C-130 Hercules that has been modified for aerial refueling. The C-130 Hercules is a four-engine turboprop aircraft used primarily for military transportation. It's known as a workhorse used in refueling, humanitarian missions, firefighting, search and rescue, and combat missions, according to the Lockheed Martin website.

It wasn't clear Monday evening where the flight originated or where it was headed.

Leflore County deputy coroner Will Gnemi confirmed that his office was called to the accident scene. He said investigators were looking for other victims at the rural crash site, searching in a soybean field with tall vegetation.

Banks told the Commonwealth that the call came in around 4 p.m. An aircraft crash truck rushed to the scene, and 4,000 gallons of foam were used in an effort to put out the fire, he said.

Firefighters were driven away by several "high-intensity explosions," Banks told the Commonwealth, adding that they thought it was possibly some ammunition igniting.

The Commonwealth reported that the flight last contacted air traffic controllers at an elevation of about 20,000 feet.

"Please join Deborah and me in praying for those hurting after this tragedy," Mississippi Gov. Phil Bryant said in a statement on Facebook. "Our men and women in uniform risk themselves every day to secure our freedom."

National Transportation Safety Board spokesman Peter Knudson said the NTSB was not involved in the investigation because the plane was a military aircraft.