TEHRAN (defapress) – The Republican-controlled US House of Representatives passed a sweeping package of bills on Russia, Iran and North Korea sanctions Tuesday in a 419-3 vote, sending the legislation to the Senate for almost certain passage and likely making it veto-proof.
News ID: 65383 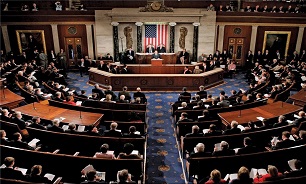 "The president has been very vocal about his support for continued sanctions on those three countries," Sanders told reporters, CBS News reported.

"He has no intention of getting rid of them, but he wants to make sure we get the best deal for the American people possible. Congress doesn't have the best record on that."

Negotiators from the House and Senate came to an agreement on the legislation in recent days after it garnered overwhelming support in the Senate but stalled in the House. The Senate originally passed the legislation in a 98-2 vote in mid-June, but the House claimed the measure violated a clause in the Constitution that says bills that raise revenue for government must originate in the House.

Sen. Ben Cardin of Maryland, the ranking Democrat on the Senate Foreign Relations Committee, said the agreement was reached after "intense" negotiations.

"A nearly united Congress is poised to send President Putin a clear message on behalf of the American people and our allies, and we need President Trump to help us deliver that message," Cardin said in a statement over the weekend.

Although the so-called Countering Iran's Destabilizing Activities Act also punishes North Korea and Iran for their aggression, the Russia portion of the legislation has received the most attention, given Trump's reluctance to criticize Russian President Vladimir Putin or acknowledge Russian meddling in the election. The White House has focused on the need to stand up to Russia instead because of its intervention in Ukraine and Crimea.

According to the latest version of the legislation, Trump would have to send a report for any plan to ease sanctions to Congress, and Congress would have 30 days to accept or reject the plan.

"The House vote on this tough sanctions bill sends a message to President Putin that meddling in US elections will not be tolerated," Schumer said.

The measure was made amid an ongoing investigation into alleged collusion between Trump’s inner circle and Russia during the 2016 presidential campaign and transition.

The US intelligence community has concluded that Moscow helped with the New York billionaire’s campaign effort ahead of winning the White House, an allegation dismissed by Moscow.

White House press secretary Sarah Huckabee Sanders maintained late on Monday that Trump was still considering whether to back the move.