TEHRAN (defapress) - A Russian Su-24 bomber rolled off the runway on takeoff from Russia’s Hmeymim air base in Syria on Tuesday, media reports said.
News ID: 66284 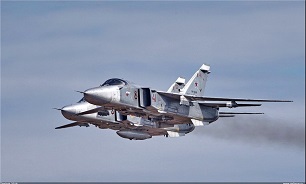 "On October 10, when accelerating ahead of takeoff from the Hmeymim airfield in Syria, a Su-24 aircraft veered off the runway and crashed. The crew of the plane did not eject in time and died," the Russian Defense Ministry statement said.

No facilities were destroyed on the ground. A technical malfunction could have caused the crash, the ministry said, Sputnik reported.

A defense industry source told Sputnik in March 2017 that the loss of the fighter jets was caused by a break in the carrier's arresting wire.

Earlier in 2016, a Russian Aerospace Forces Mi-28N Havoc helicopter crashed near the city of Homs in Syria, killing both pilots, according to the Russian Defense Ministry.