Army not to be used against Kurds: Iraqi PM

TEHRAN (defapress) –While Iraqi Kurdistan region's offiicials in attempt to create a psychological war agains Baghdad claimed baghdad is preparing for military action against Kurdish region, al-Abadi said in televised comments broadcast on Iraqi state television,“We won’t use the army against the people and we won’t wage a war against the Kurdish people."
News ID: 66335 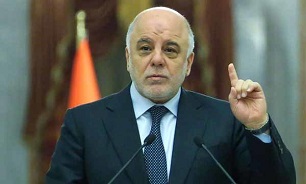 According to Anadolu, he went on to stress that the Iraqi armed forces were devoted exclusively to providing public security inside Iraq and protecting the country from foreign threats.

"It is our responsibility to safeguard Iraq’s unity,” he asserted

Tension has steadily mounted between Baghdad and northern Iraq’s Kurdish Regional Government (KRG) since Sept. 25, when Iraqis in KRG-controlled areas -- and in a handful of disputed areas -- voted on whether or not to declare independence.

In the immediate aftermath of last month’s illegitimate poll, Baghdad banned international flights from entering KRG-controlled areas and closed all foreign diplomatic missions based in the Kurdish region.