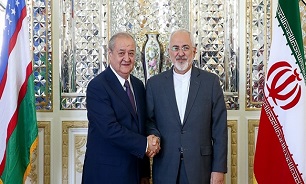 During the meeting in Tehran on Tuesday, the two high-ranking officials stressed the need for boosting cooperation in the oil, gas, tourism, consular, technical, engineering and agricultural fields as well as car-manufacturing industry, war on terrorism and extremism, holding economic commission meetings, establishment of direct flights and transit issues.

The regional developments, specially in Afghanistan, Iraq and Syria, were among other topics of talks between the Iranian and Uzbek top diplomats.

After the meeting, Zarif and Kamilov signed a document to bolster cooperation between the two countries' foreign ministries.

In relevant remarks in September, Iranian President Hassan Rouhani in a meeting with his Uzbek counterpart Shavkat Mirziyoyev underlined his country's preparedness to cooperate with the Central Asian states in the fight against the terrorist groups.

"Today extremism and terrorism threaten the entire region and we are ready for cooperation with the Central Asian states to fight against terrorism," President Rouhani said during the meeting on the sidelines of the Islamic countries' summit in Astana.

Elsewhere, he stressed the necessity to speed up widening of banking ties between the two countries, adding that it can enhance the level of bilateral trade relations.

Mirziyoyev, for his part, called for the development of mutual cooperation in academic and energy fields as well as campaign against terrorism and extremism.

He also said that Tashkent supports Iran's membership in the Shanghai Cooperation Organization.