TEHRAN (defapress)- Top Military Aide to the Iranian Supreme Leader Major General Yahya Rahim Safavi underlined that the country's missile program and its stances on the regional issues are not negotiable.
News ID: 66534 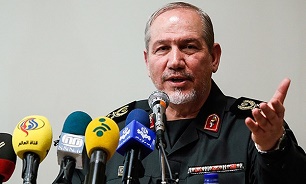 "The Americans should know that the missile power and the regional issues, including Syria and Iraq, are related to Iran's national security and regional security and are not for bargain," General Rahim Safavi said, addressing a ceremony in the Northwestern province of East Azarbaijan on Wednesday.

He expressed confidence that the Americans will be forced to withdraw from their political positions and withhold their cruel sanctions against Iran.

In relevant remarks earlier this month, Iranian Foreign Ministry Spokesman Bahram Qassemi reiterated his country's opposition to any kind of talks with foreign powers over its missile and defensive programs.

"We have not changed our position and have several times repeated that our missile issues are a part of our defensive policies that are not in violation of the (UNSC) Resolution 2231 at all," Qassemi told reporters in Tehran.

"We don’t allow other governments to interfere" in our domain of affairs, he added.

Also, in August, Qassemi blasted the US officials' remarks against the country's missile program, stressing that Washington is not entitled to speak about Iran's internal affairs.

"The issue with the missile is internal, defensive and related to deterrence which is in no violation of Resolution 2231 and is not related to them (the Americans)," Qassemi said.

Asked about the US officials' demand for inspecting military centers in Iran, he described it as humorous, saying that anything necessary has been mentioned in the (nuclear) negotiations and speaking of such visit is a "dream that will never come true".

Qassemi added that Iran is a country which has the lowest defense budget in the region but meantime relies on its youth to develop defensive capabilities.