TEHRAN (defapress) – Iran’s UN envoy Khoshroo has stated that women have been and continue to be the primary victims of large-scale, often systematic violence.
News ID: 66714 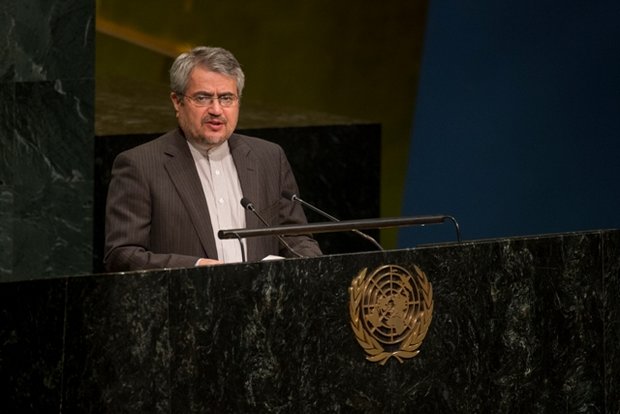 Permanent Representative of the Islamic republic of Iran to the United Nations, Gholamali Khoshroo, made the remarks in a statement issued on Friday prior to a Security Council Open Debate on ‘Women, Peace and Security’.

The full text of Khoshroo’s statement is as follows:

In the Name of God, the Compassionate the Merciful

I would to express my gratitude to Franc for organizing today’s debate and thank the briefers.

A growing body of evidence shows that women’s participation in peace and reconciliation process and their implementation has contributed to higher chances for the sustainability of peace and security arrangement in various parts of the world.

As a result of foreign intervention, military invasion as well as foreign occupation combined with the upsurge of violent extremism and terrorism, women and girls in many parts of the Middle East witness the collapse of their hopes for a better future.

At the same time and sadly, in many conflicts, especially in the Middle East, women have been and continue to be the primary victims of large-scale, often systematic, sexual violence. Actions committed by terrorist groups, particularly Daesh, Boko Haram and Al-Shabaab show the most extreme forms of such violence, which particularly targets women and children. There are thousands of confirmed cases where sexual violence was used as a tactic of terrorism, employed by extremist groups in places such as Iraq, Syria, Somalia, Nigeria and Mali to advance their military, economic and ideological ends.

It is naïve to assume that by the physical disappearance of Daesh in Iraq and Syria, their heinous activities and atrocities against the innocent civilians, especially women and children would be seized. Indeed, they have integrated those dreadful practices into their Takfiri ideology, a destructive ideology of hate and exclusion, enforced by complicated networking all around the world. The international community needs first and foremost to concentrate its fight against such a vicious ideology and those who harbor it.

At the same time, we cannot neglect the very important dynamics such as interventionist policies, occupation as well as "regime change” attempts that have prepared the best breeding grounds for radicalism, terrorist and extremist groups to grow and function. The experience in our region clearly shows that after each aggression and foreign intervention there is a vacuum period of ensuing instabilities, effectively utilized by those groups who have committed the most serious crimes against innocent civilians and specially women and children as the most vulnerable fabrics of the society freely. The failed state situation and post aggression environment gives them a free hand to organize themselves and propagate their ideology. Unfortunately, this Council normally does not discuss the role of those who have the prime responsibility by creating breeding ground for terrorists. For obvious reasons, it prefers to discuss the symptoms and not the causes.

Iranian women are a​n integral part of the ​vibrant ​Iranian society. Their outstanding role in​ the society​ to advance development, peace and humanitarian causes is incontestable​. They are active participants in political life and elections ​as both candidates and voters​. Education has been the centerpiece of our efforts towards empowerment of women and girls during the last four decades. It is not then surprising that the number of girls who study medicine and science in Iran has become twice that of men. The role of private sector, including micro-enterprises and cooperatives for women’s economic empowerment shows a substantive increase in Iran. It is noteworthy that, our national achievements are made against the most hostile unilateral coercive sanctions against Iranians. Such inhumane and indiscriminate sanctions, imposed by the US under​ dubious ​pretexts, are in flagrant violation of the basic economic and social rights of our women and girls as well as their right to development and undermines the constructive role the Iranian civil society and women can play in their society.

I hope this open debate will contribute to ongoing efforts to integrate the women, peace and security agenda into conflict prevention.