Major General Bagheri at the National Conference on Passive Defense:

If sanctions are restored, there is no sense in staying at stake
News ID: 66757 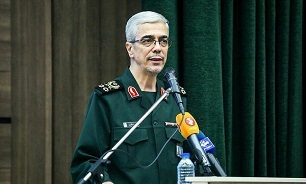 The head of the Armed Forces General Staff said that sanctions should not be returned to excuses and other names; if sanctions are restored, there is no sense in staying intact.

According to the  Defense Forces Reporter , Majir general Mohammad Bagheri, Chief of Staff of the Armed Forces, said Monday morning at a national conference on passive defenses of the bad conduct of the United States on the outcome: Iran is facing restrictions on nuclear power And its development has accepted that mutually binding nuclear related sanctions should be taken, which are clearly stated in the end.

He added: "Accordingly, the sanctions should not be returned to other excuses and names; then, the decision of the system to remain in effect is meaningless, since there is not a holy verse that we adhere to at any cost.

Majir General Bagheri continued: "Security has been approved by the Security Council in Resolution 2231, part of which is the adoption of Iran's nuclear restraint and the second part of the repetition of sanctions." So, if sanctions are returned, staying intact does not make sense.